Our Heart for and Dedication to Serving Rural America 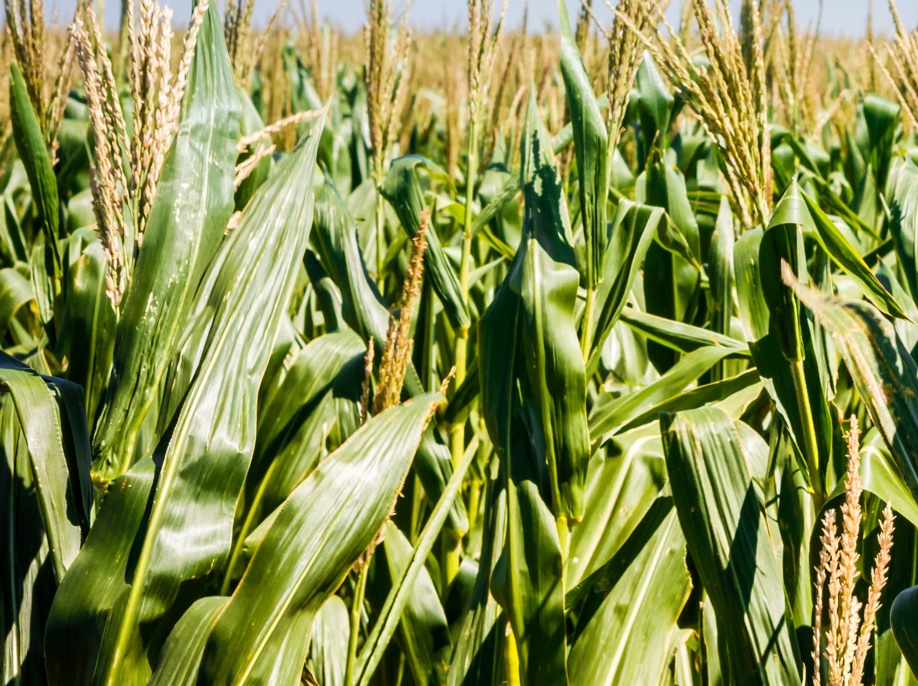 OVER 15 YEARS OF EXPERIENCE

We know the critical impact that agriculture producers have on our nation's economy. From our beginnings - organizing agriculture in the 2005 Budget Reconciliation fight - we've distinguished ourselves as trustworthy leaders in representing agricultural and rural interest at the federal level.

Standing True to Our Rural Values

As a small firm with rural roots and a national scope, we're proud of the extensive reach and meaningful change that Combest, Sell & Associates has achieved over the years. With decades of combined agricultural and legal experience, our team is dedicated to each client's success. We utilize our unique skillsets to advocate in your best interest and invoke sound policies and support for our rural communities. 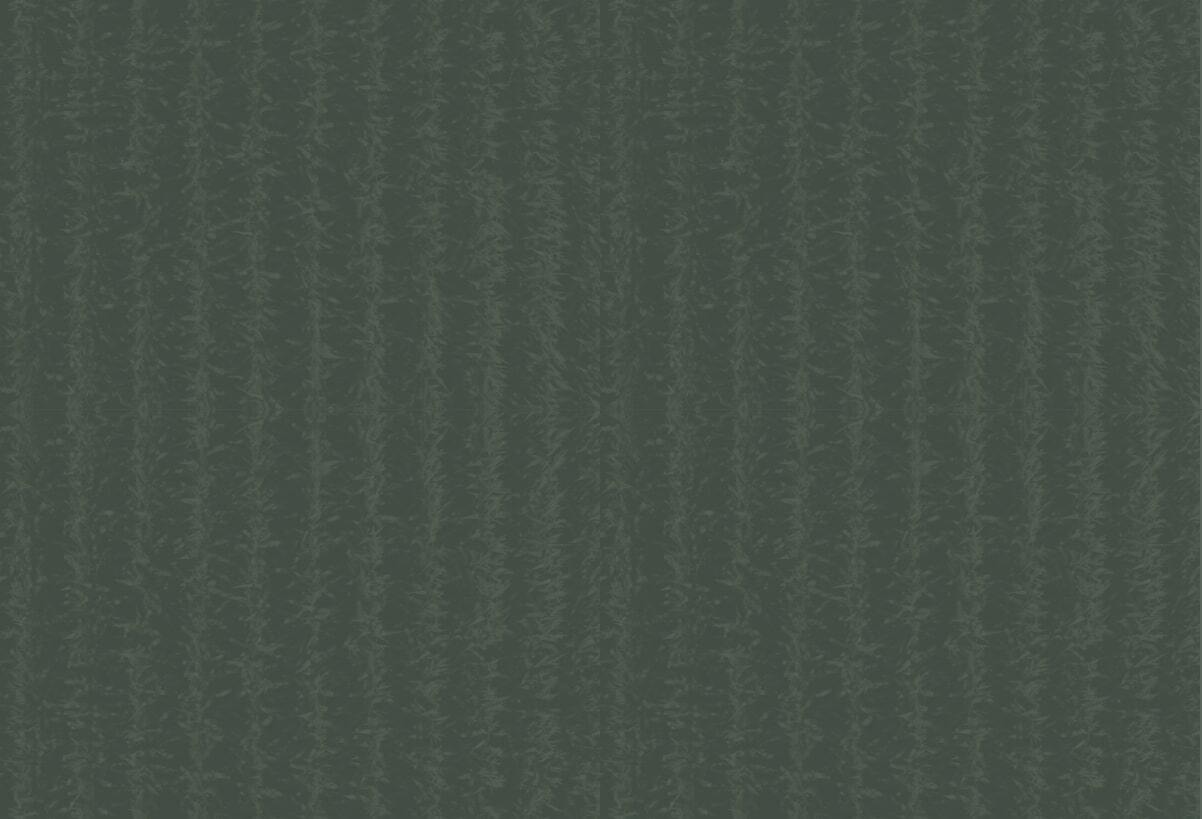 Combest, Sell & Associates was established in January of 2005, when Tom Sell was approached to re-engage Larry Combest, a former Chairman of the House Agriculture Committee, to bring their particular talents back to the field in Washington. A coalition of agricultural interests from across the nation sought out their counsel and leadership to protect the agricultural baseline in the 2005 Budget Reconciliation Process – an effort that was ultimately very successful.

Over the years, our firm has continued to progress as a distinguished leader and force to represent countless notable associations, coalitions, and corporations on agricultural, food security, and rural issues.

Our legacy here at Combest, Sell & Associates is to honor the legacy of our now retired co-founder, Larry Combest. With years of service - and primary authorship of the 2000 crop insurance rewrite and the 2002 Farm Bill - the Honorable Larry Combest has undoubtedly left his mark on agricultural policy, not only across the U.S. but the world.

Learn About The Honorable Larry Combest 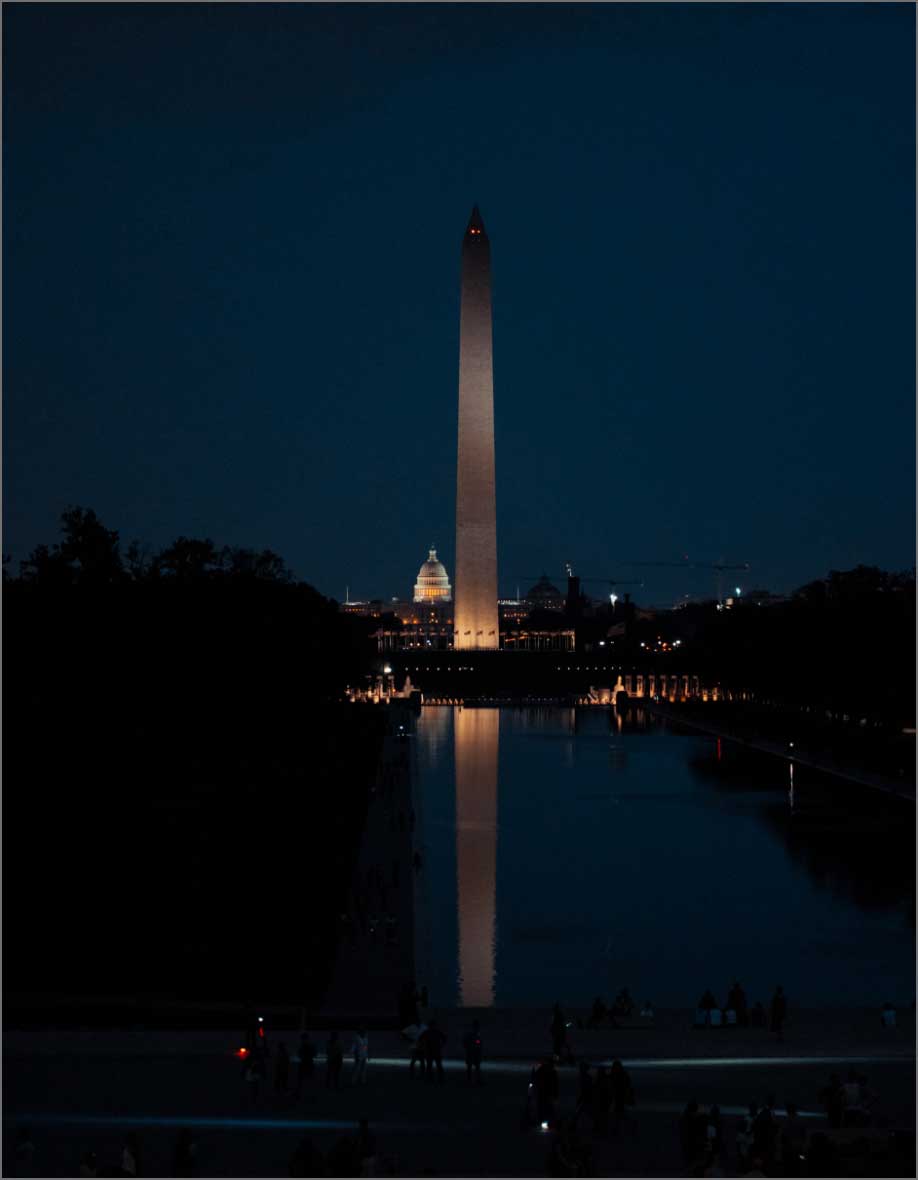 Food, Conservation, and Energy Act of 2008 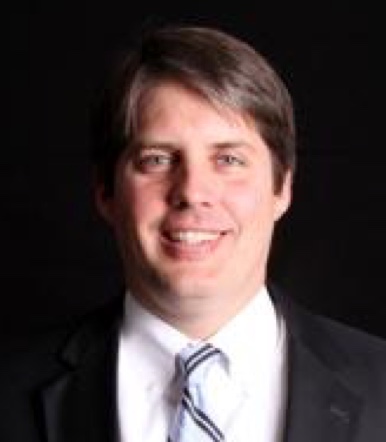 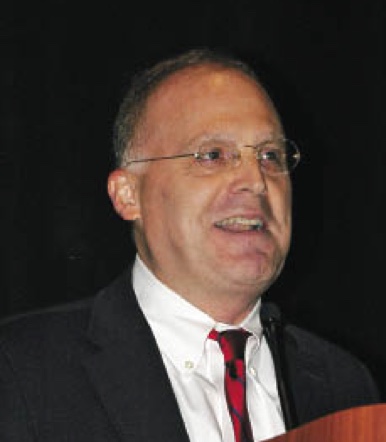 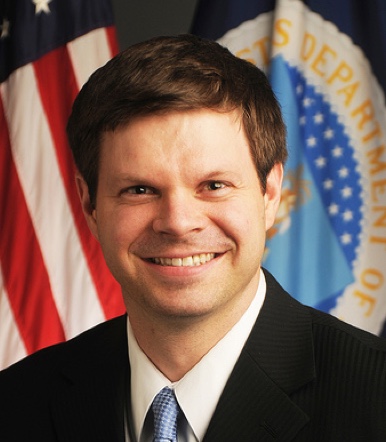 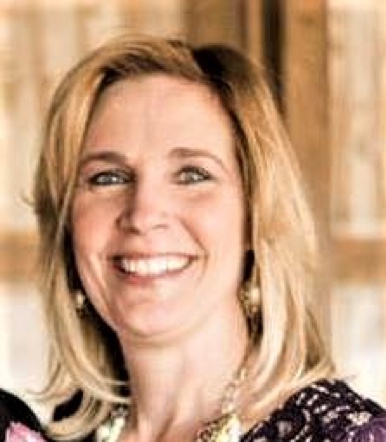 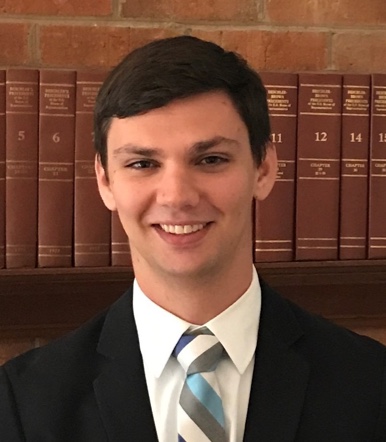 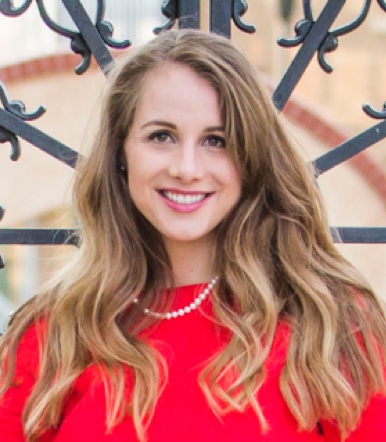 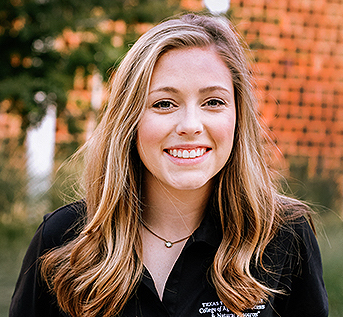 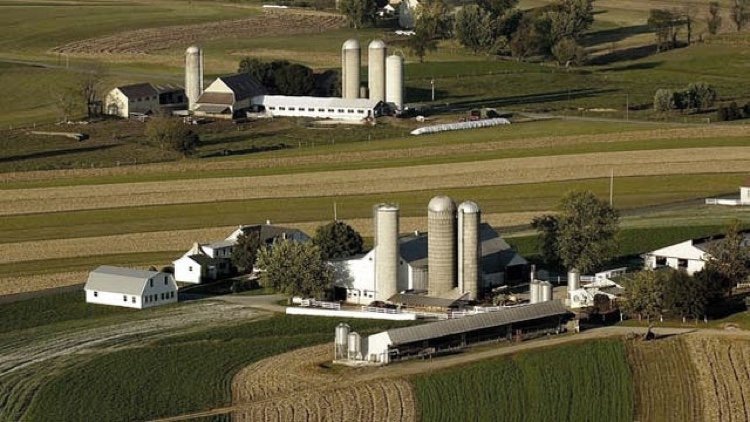 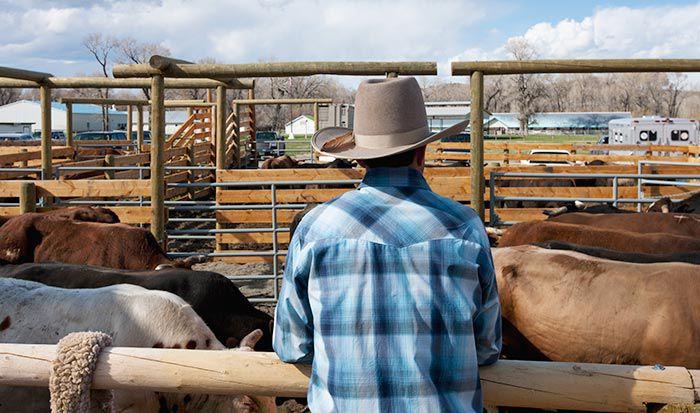 Long Year Ahead for Farmers, Producers

Farmers have been hit hard for years. Now the COVID-19 pandemic has turned an already 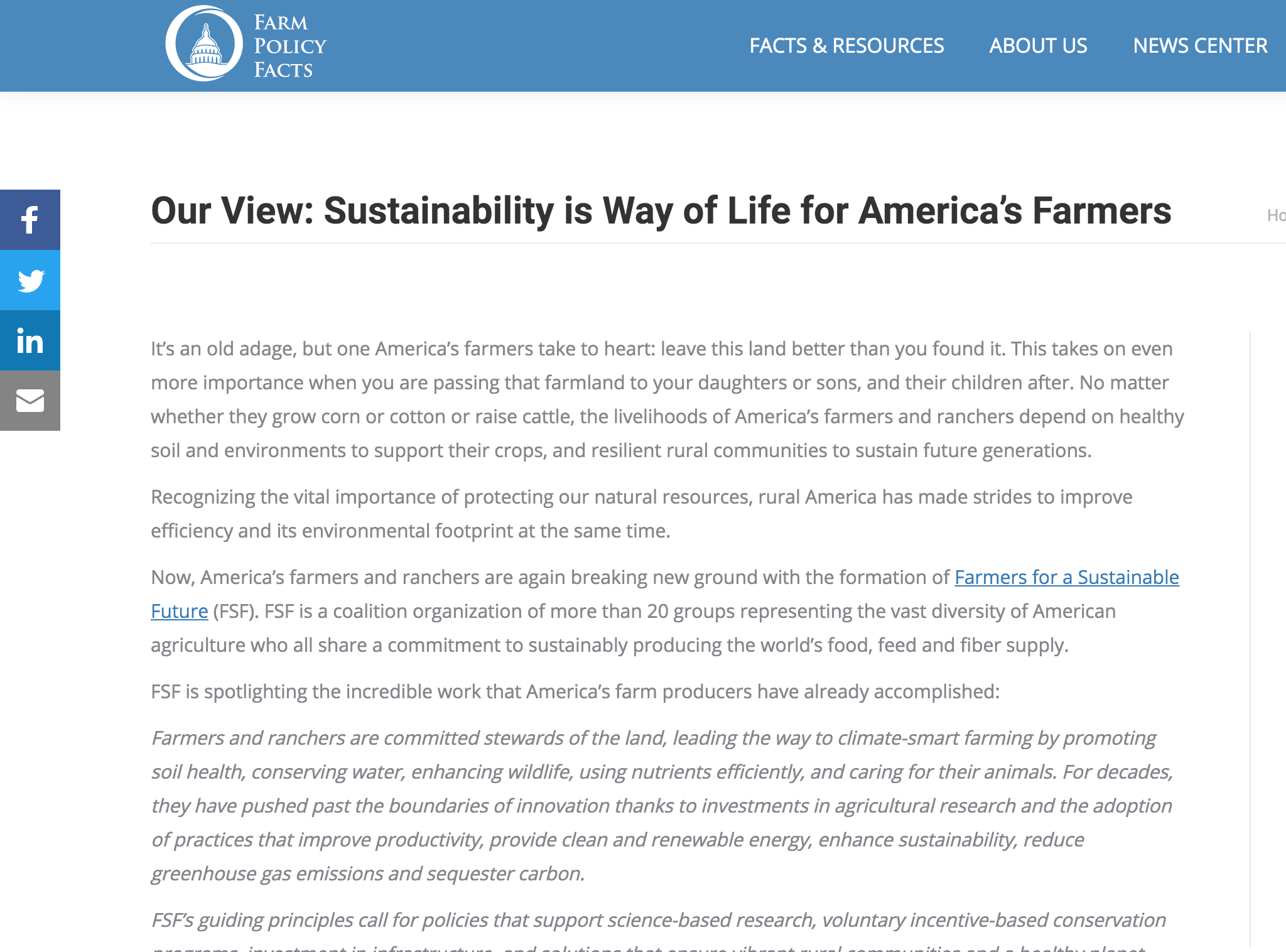 Our View: Sustainability is the Way of Life for America's Farmers

Farmers have been hit hard for years. Now the COVID-19 pandemic has turned an already 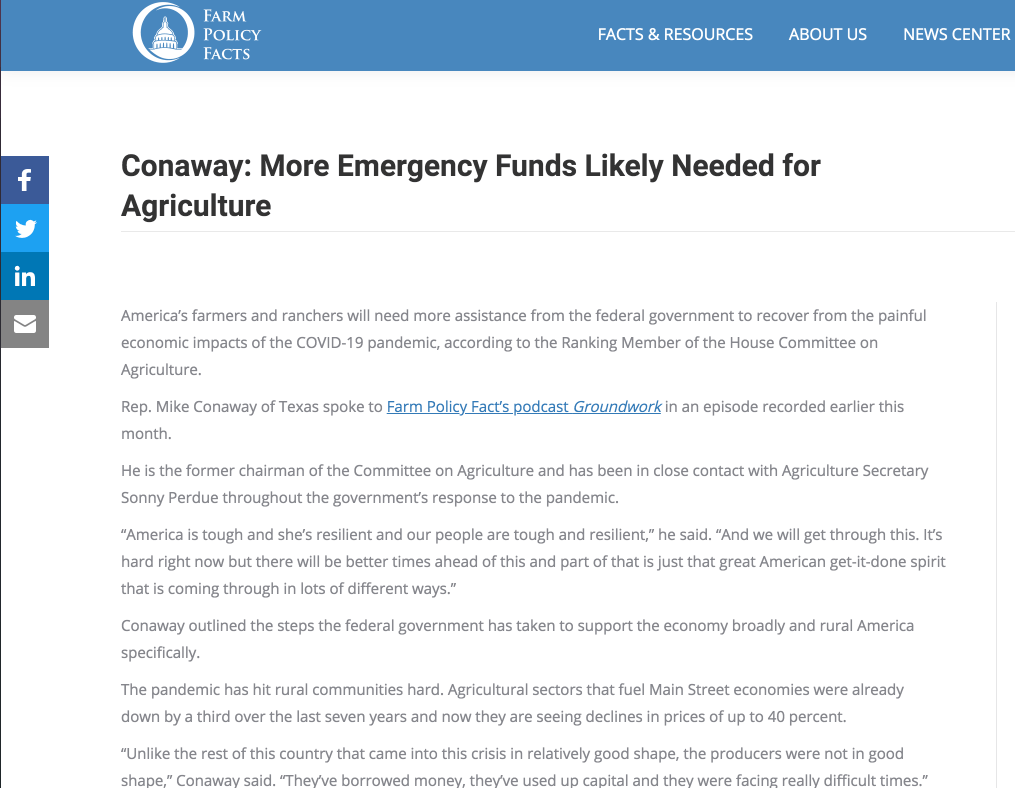 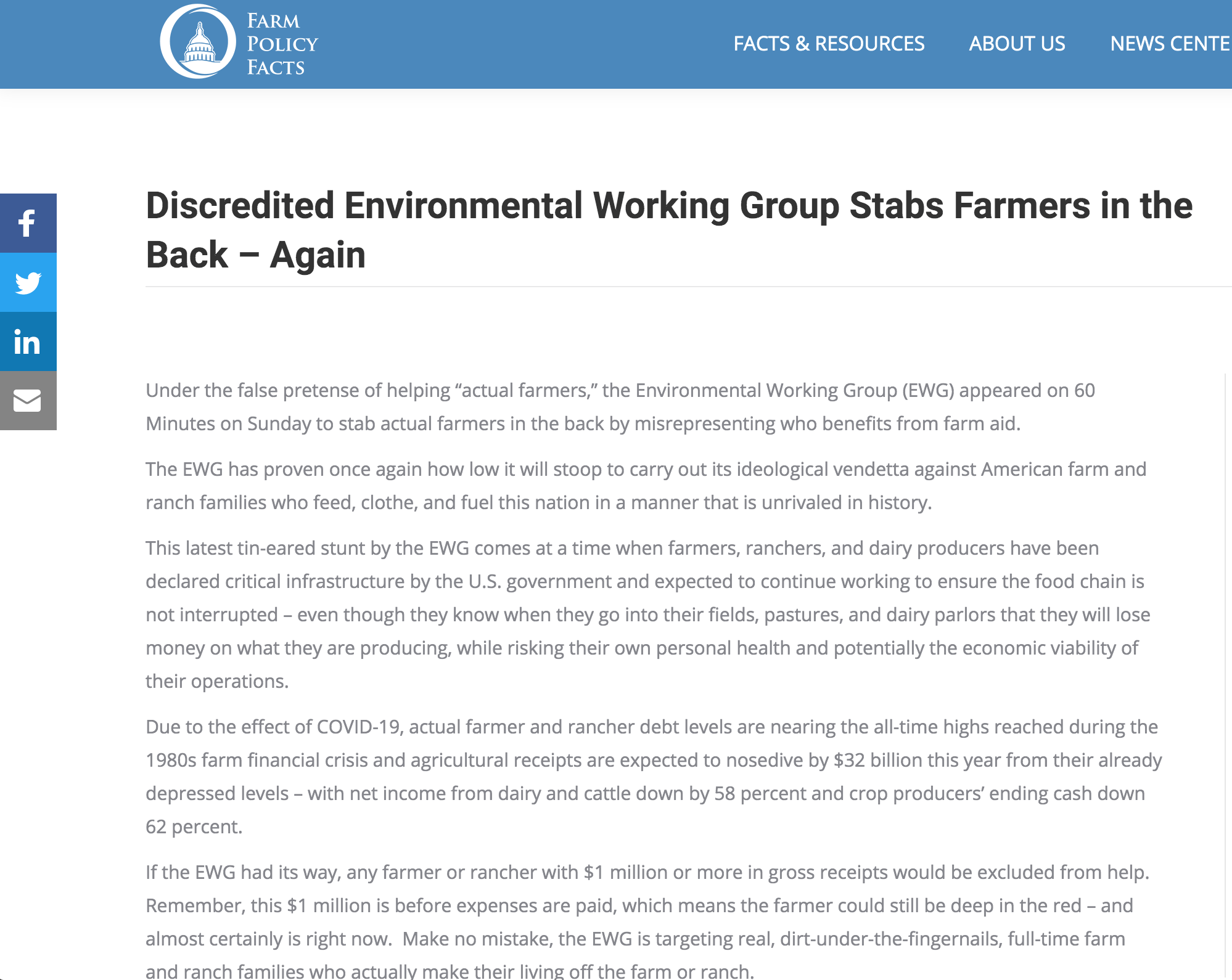 Discredited Environmental Working Group Stabs Farmers in the Back – Again 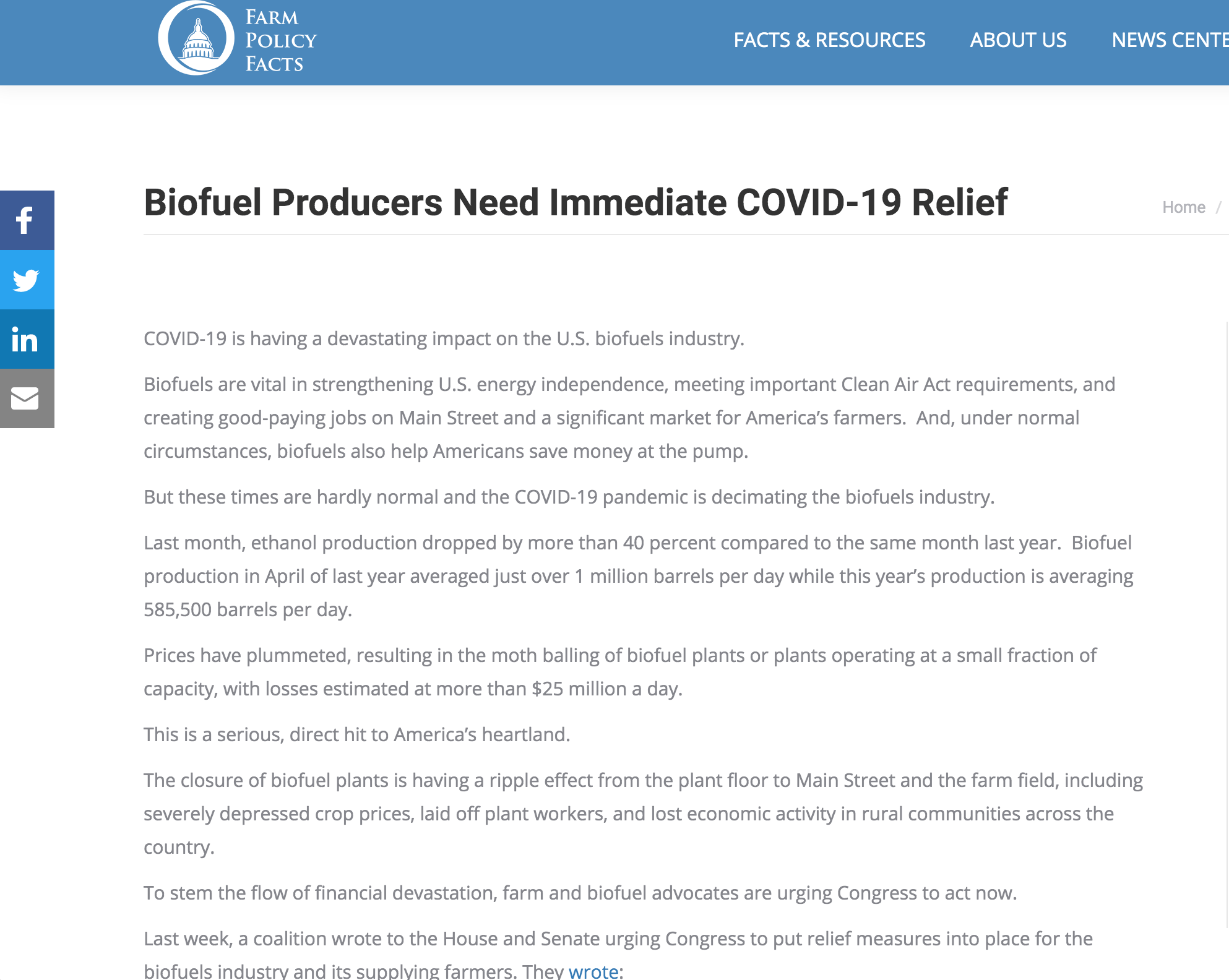 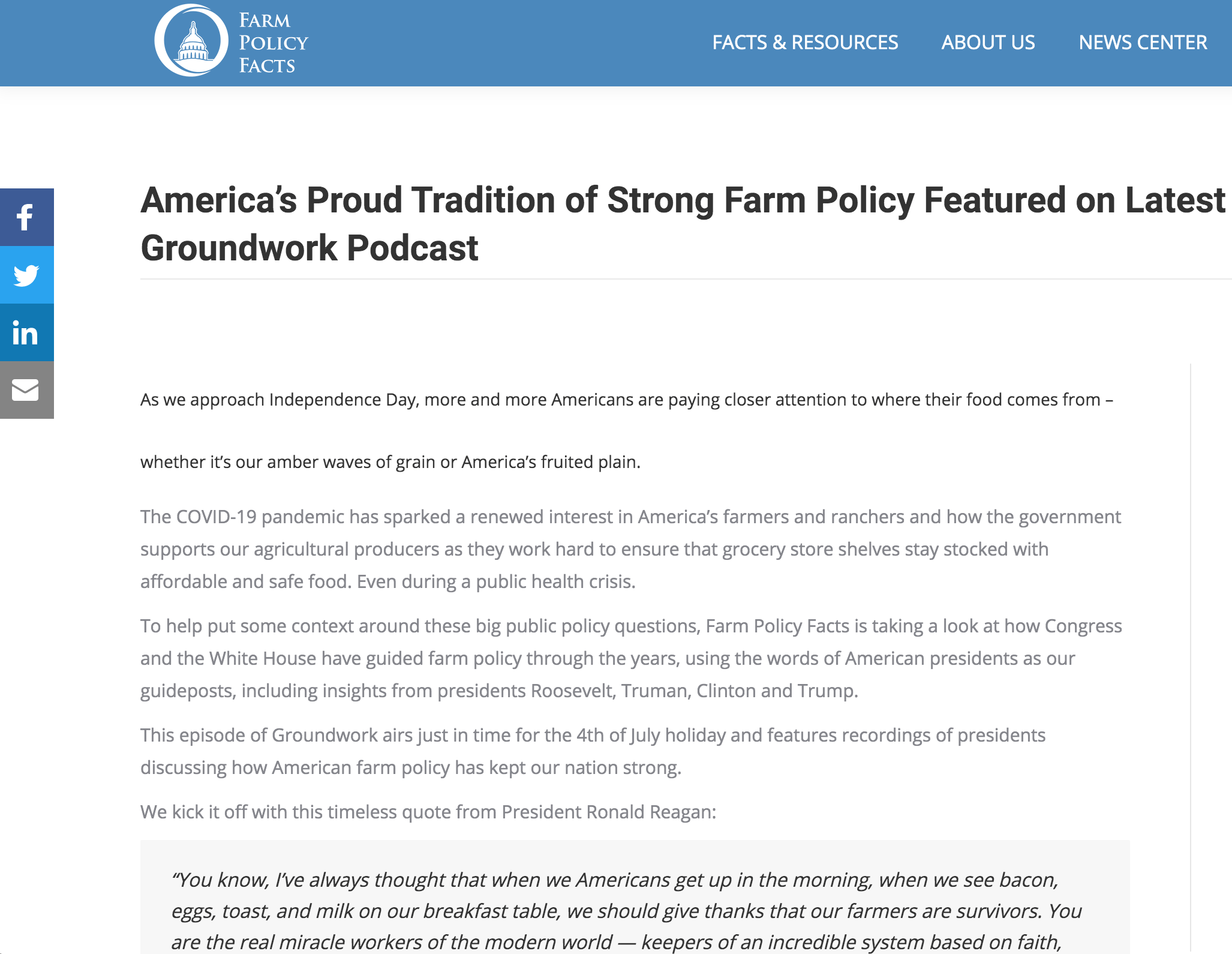 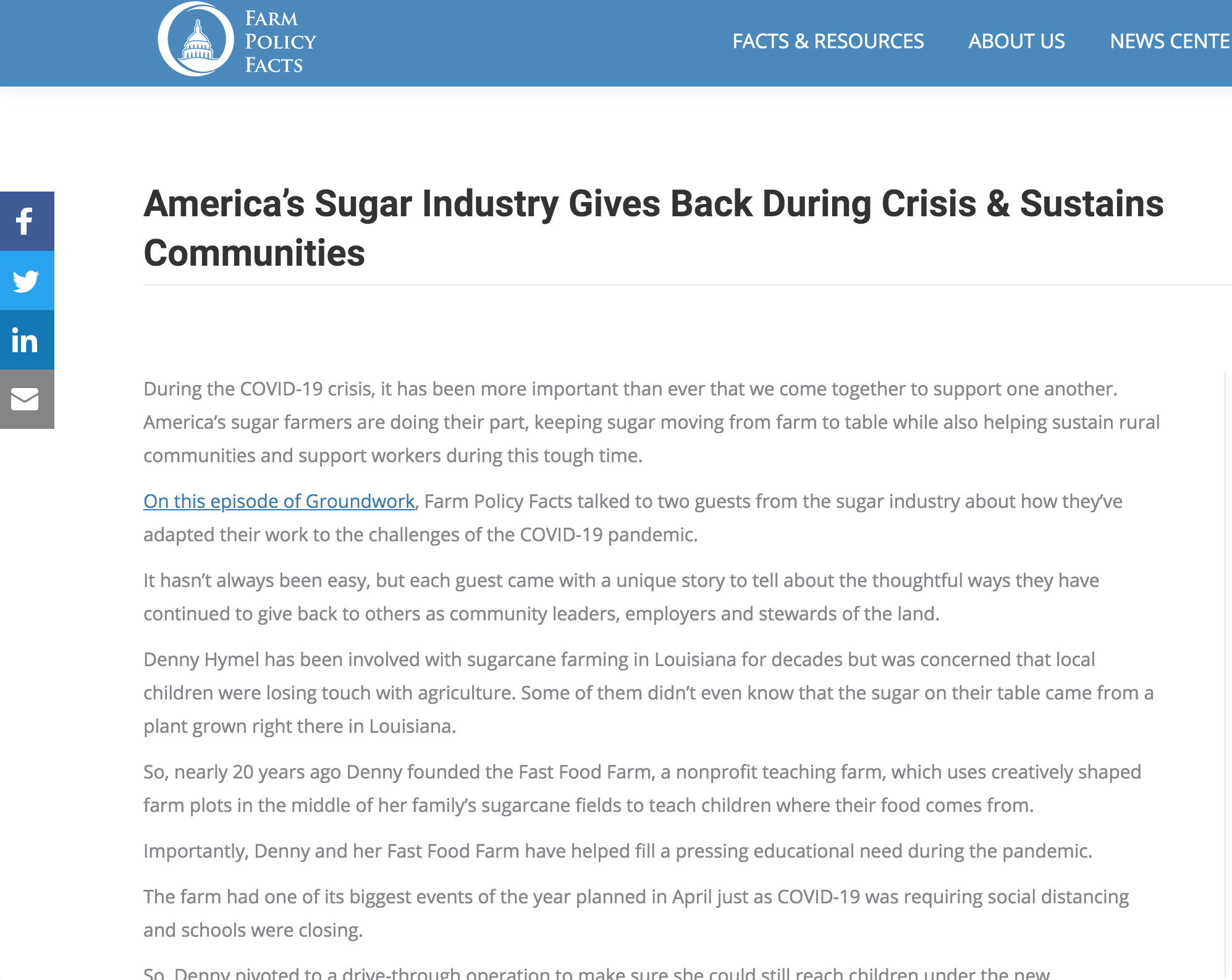 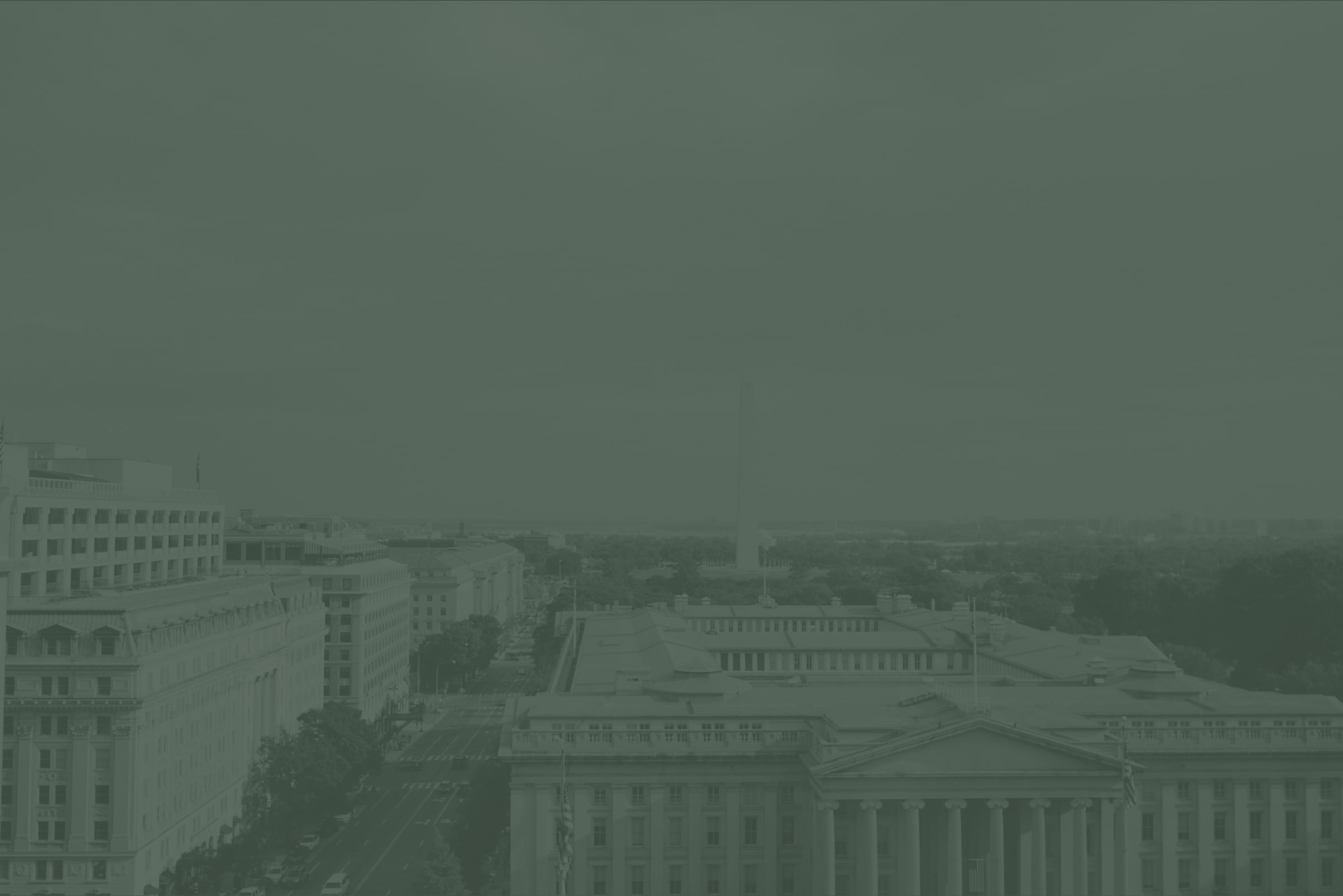 Cultivators of the earth are the most valuable citizens. They are the most vigorous, the most independent, the most virtuous, and they are tied to their country and wedded to it’s liberty and interests by the most lasting bands.

When tillage begins other arts follow. The farmers, therefore, are the founders of human civilization.

The first farmer was the first man, and all historic nobility rests on possession and use of land.

It will not be doubted, that with reference either to individual, or National Welfare, Agriculture is of primary importance. In proportion as Nations advance in population, and other circumstances of maturity, this truth becomes more apparent; and renders the cultivation of the Soil more and more, an object of public patronage.

Farming looks mighty easy when your plow is a pencil and you’re a thousand miles from the corn field.

For all gainful professions, nothing is better, nothing more pleasing, nothing more delightful, nothing better becomes a well-bred man than agriculture. 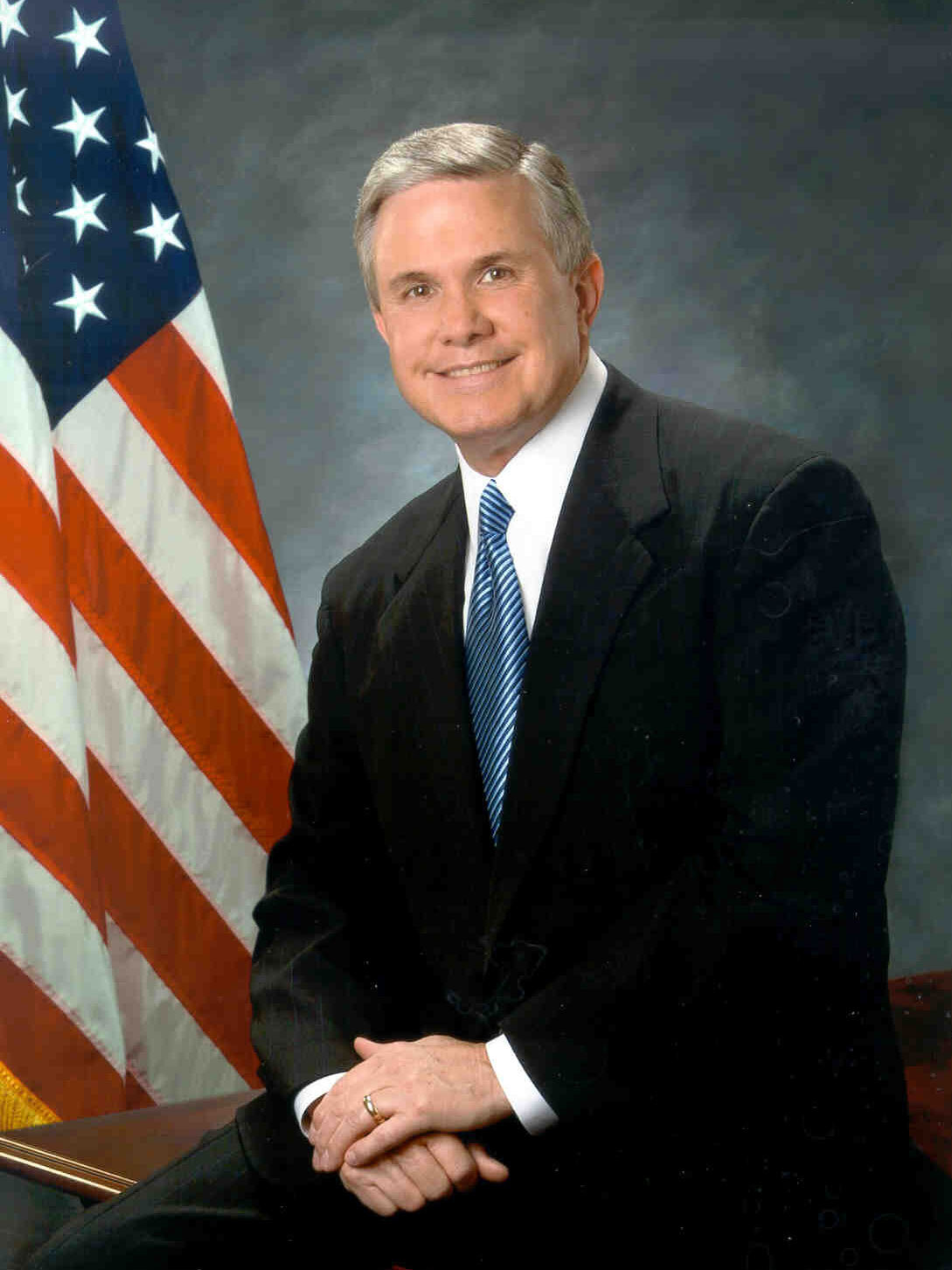 From its founding, CS&A has worked with passion to honor the legacy of our co-founder, Larry Combest, and the mark he has left on agricultural policy in the U.S. and world. Though Chairman Combest is now fully retired from the firm, we continue to strive for excellence in our representational efforts and all we do to stand for the agricultural producers of this nation so that Chairman Combest's legacy continues to grow. Learn more about the Honorable Larry Combest here.

The Honorable Larry E. Combest grew up on the Combest family farm in the eastern panhandle of Texas where he learned first-hand the value of hard, honest work. He attended then-West Texas State University (now West Texas A&M) in Canyon, Texas, driving 200 miles each day to attend class and help at the farm. Aiming to stay close to his agriculture roots, a young Larry Combest took a job as a director with the Agricultural Stabilization and Conservation Service (now the Farm Service Agency) where he caught the immediate notice of United States Senator John Tower who tapped the young man to be his agricultural staffer. After serving a number of years for the powerful Texas Senator and with two Farm Bills under his belt, Larry Combest set his sights on the Llano Estacado and returned home to West Texas where he entered the private sector as a small businessman. Six years later, the sitting congressman for the 19th district announced that he would not seek reelection and Combest threw his hat in the ring. Combest won the GOP primary and then the general election that year with nearly 60 percent of the vote, becoming the first Republican — and one of only three men ever — to represent the 19th Congressional District of Texas which then ran from Oklahoma down to the Pecos River, along the Texas-New Mexico border, and included parts of Amarillo, Lubbock, and Midland-Odessa. His fellow West Texans reelected Combest nine times, including twice unopposed and twice without major party opposition. His last two elections he won with over 90 percent of the popular vote.

During his 18 years in Congress, Combest was entrusted with the Chairmanship of the House Select Committee on Intelligence and later served as the Chairman of the All-Powerful House Committee on Agriculture, joining fellow Texas Reps. Marvin Jones, William R. Poage, E. Kika de la Garza, and later K. Michael Conaway who also hold that distinction. The year prior to Combest taking the reins at the House Agriculture Committee, the U.S. agriculture economy had collapsed into a deep and serious recession and required Washington’s attention. The newly minted Chairman successfully advocated annual ad hoc emergency relief to help see farmers and ranchers through to better times but Combest also insisted that Federal Crop Insurance and the Farm Bill be significantly strengthened to assist farmers and ranchers over the long haul as they cope with Mother Nature and the predatory trading practices of foreign countries. The major rewrite of the Federal Crop Insurance Act, credited with much of the success of Crop Insurance since 2000, and the 2002 Farm Bill, credited with restoring the farm safety net to struggling farmers and ranchers, both bear the name of Larry Combest as their principal sponsor. Combest is one of only a baker’s dozen in the history of our country to have his name as the chief sponsor of a Farm Bill.

After retiring from Congress, Combest and his wife, Sharon — his best friend and constant companion — took their turn at retirement but soon realized they had much more to offer and their work on behalf of America’s farmers and ranchers was not yet done. In January 2005, Combest began the CS&A practice with his long-time staffer and friend, Tom Sell, who had served Chairman Combest as his Deputy at the Agriculture Committee. Together, they set out to represent the people and the causes they had fought for all of their lives. Over the course of 15 years, under the strong and steady leadership of Chairman Combest, Combest, Sell & Associates has done and continues to do just that each and every day: fight for America’s farmers and ranchers and small-town USA. Now, after 15 years with Combest, Sell & Associates, 18 years in the United States House of Representatives, 8 years as an Agriculture LA in the U.S. Senate, a stint as an ASCS director, and after helping craft 7 of America’s 17 Farm Bills, Larry Combest is hanging up his spurs in order to spend more time in full retirement with Sharon in their beloved West Texas and the mountains of Colorado. We at Combest, Sell & Associates will continue to proudly bear his legacy and continue the fight for U.S. farmers and ranchers and rural America which Chairman Combest has so ably and so honorably served all of his life. Godspeed, Chairman Combest.

Tom Sell, in his role as founder and manager of Combest, Sell & Associates provides the firm steady guidance and management, fosters strong relationships with influential leaders in Congress and the Administration, and leads client development efforts.

Prior to founding CS&A, Tom served as Deputy Chief of Staff for the House Committee on Agriculture, where he was instrumental in crafting the 2002 Farm Bill and the Agricultural Risk Protection Act of 2000. He also served in the President George W. Bush Administration – on the transition team in 2000 and later as Director of Intergovernmental Affairs.

A native of West Texas, Tom is a licensed member of the State Bar of Texas and received his Doctor of Jurisprudence from the Texas Tech University School of Law and a Bachelor of Science in Agribusiness from Texas Tech University. Tom and his wife, Kyla, reside in Lubbock, Texas and have four children. He remains active in his family’s farm and ranch operation and serves on community, church, and charitable boards and commissions.

Prior to joining CS&A in 2005, Jeff served 13 years on Capitol Hill, including as a Legislative Director in the U.S. Senate and as Counsel for the House Committee on Agriculture where he was lead counsel on the Agricultural Risk Protection Act of 2000 and numerous titles to the 2002 Farm Bill, including commodities and crop insurance. Jeff also clerked for the Honorable Paul A. Magnuson, Chief Judge of the U.S. District Court for the District of Minnesota where he was sworn into the Minnesota State and Federal Bar. Jeff has had a hand in crafting every major agriculture statute written in the past 25 years.

A native of Bluffton, Minnesota in Otter Tail County, Jeff graduated with distinction from the University of North Dakota School of Law where he also earned his undergraduate degree. Harrison resides in Washington, DC and is active in the Latin Mass community at his parish.

Jill Whitley serves as the Member & Events Manager at Combest, Sell & Associates. In her role, Jill oversees CS&A association management services and is responsible for meeting planning and execution.

Prior to joining CS&A in 2015, Jill was the Central United States Training Coordinator for Fireman’s Fund Insurance where she trained both crop insurance agents and adjusters. She also worked for USAG Insurance Services and the Roosevelt Independent School District.

Jill was raised on her family’s third-generation farm in Acuff, Texas where she lives today. She attended Texas Tech University. Jill and her husband, Chad, have two children and one grandchild.

Prior to joining CS&A in 2017, Brad worked as a teaching and research assistant for the Agricultural and Food Policy Center at Texas A&M University. He also interned with the GIC Group, a DC-based agribusiness consulting and investment firm.

A native of Napoleon, Ohio, Brad was raised on his family’s corn, wheat, and soybean farm. Brad received his Master of Science in Agricultural Economics from Texas A&M University and an undergrad from the University of Toledo. Brad resides in Washington, DC.

Linsey Ogden serves as Director of Government Affairs at Combest, Sell & Associates. She coordinates communications for the firm while providing keen advice and insight for clients and key contacts in Congress and the Administration. Linsey has also become a respected resource in conservation policy and humanitarian food aid initiatives.

Prior to joining CS&A in 2017, Linsey worked with the U.S. Peace Corps in rural Cameroon where she trained and advised smallholder farmers. She also completed a Congressional internship and served as the Southwest Council of Agribusiness Fellow.

A native of Loving, New Mexico, Linsey was raised on her family’s farm and ranch. She received a Master of Business Administration and Bachelor of Science in Animal Science from Texas Tech University. Linsey lives in Washington, DC.

Maggie Pipkin is the Combest Sell and Associates Legal Fellow. Maggie provides important policy analysis, helps facilitate and organize meetings and events, and assists with the development of website content, design, and videography.